Top Posts
Back IN ITALY the BtoB of European wine...
Antinori (Tuscany) – Italy
An important new selection of Italian wines on...
Il Maiolo Wines – Organic Winery in the...
WHISKIES OF THE WORLD
VINITALY AT THE TIME OF THE PANDEMIC
American Airlines Will Feature New Wines on Flights...
Ribble Valley wine shop with its own bar...
Wines from Spain announces 2022 tastings in two...
The Most Intelligent Wine Event In The World
Home Wine Enjoy the Taste of Spanish Wines
Wine 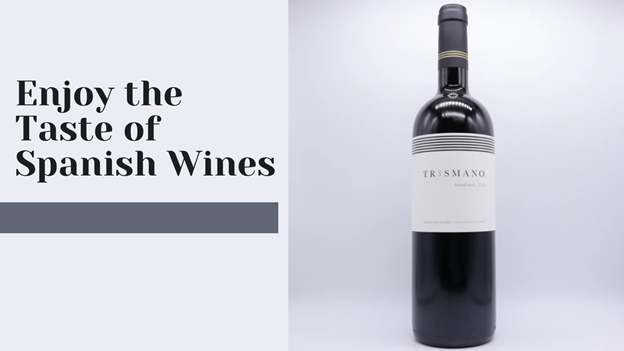 When it comes to beverages, you think of Sangria when hearing Spain. But believe me, there are many more exciting things to get to know. With My Wine+, we will meet Spanish wines, especially Spanish Red Wines.

Briefly About the Spanish Red Wines

Many Spanish vineyards mature the wine for you, both in oak barrels and in bottles, which is one of the characteristics that makes Spanish wine unique. This means you can sample cellared wines that have matured to the point where they are at their best without having to invest in storage space at home. When you see the terms Joven, Crianza, Reserva, or Gran Reserva on a Spanish wine label, they refer to how long the wine has been aged: Gran Reservas have been cellared the longest, while a bottle with ‘Joven’ on the label hasn’t spent nearly as much time at the winery.

Denominación de Origen Calificada is at the summit of the Spanish wine quality pyramid (it has several abbreviations because of regional dialects: DOCa, DOC, or DOQ). Rioja and Priorat are the only two DOCs. Spain also has a special category for single estates called DO Pago.

When looking at bottles of Spanish wine, the major grape is usually front and center on the label, or the back if it’s not on the front. One thing to keep in mind is that due to regional language differences, grapes and locations may appear slightly different. In Catalonia, for example, Garnacha will be spelled Garnatxa.

Rioja and Ribera del Duero are the two most well-known Tempranillo-producing regions.

A luscious and spicy style of Tempranillo that is aged for less than a year on average. Wines that have not been matured for a long time are peppery, meaty, and sour. The majority of low-cost Tempranillo is lighter-bodied and lacks the nuanced notes of brown spices derived from oak aging. Those wines are perfect for making Sangria!

Wines with a high tannin content that enhance Tempranillo’s greatest traits and are matured in wood and bottle for several years. The spiciness of Tempranillo is softened as it ages, and the flavors become nearly sweet and dry.

This style is often more expensive due to the increased cost of aging. Keep an eye out for wines bearing the designations Reserva and Gran Reserva.

In France, Garnacha is known as Grenache, but it is a Spanish vine. This fresh and fruity Garnacha has a lovely red fruit fragrance and a silky, iced tea-like finish.

This kind of Garnacha can be found in Northern Spain, near the French border, in the Aragon and Navarra areas. Sangria made with young Garnacha has a beautiful candied red fruit flavor.

People may refer to Rioja wines as either ‘traditional’ or modern in style. What exactly does this imply?

While some winemakers are firmly entrenched in one camp or the other, many others employ approaches that fall somewhere in the middle. Some wines may have been matured in a combination of American and French oak barrels, or even in barrels constructed entirely of both types of oak.

We put some links where you can go and find the best Spanish wines on my wine+, but it is not a harm to look for them once again by yourself! Enjoy that here!

Why you should carry stylish wine bottle...