Wine Corks vs. Screw Caps: Which Would You Choose?

How many of you who have wine collections actually have wines in them with screw caps? Please… let us know! At Wine Factor, we have sampled very good balanced exquisite Pinot Noirs from New Zealand and a couple from the States with screw caps that were of the quality to add to our wine lists

There is an ongoing debate about the feasibility of offering high quality wines with Stelvin caps (the correct terminology for wine screw caps), the brand now owned by Amcor. The caps have an elongated outside skirt, which resembles the traditional wine capsule or foil, and uses plastic PVDC (Polyvinylidene chloride) to act as a neutral impermeable liner. 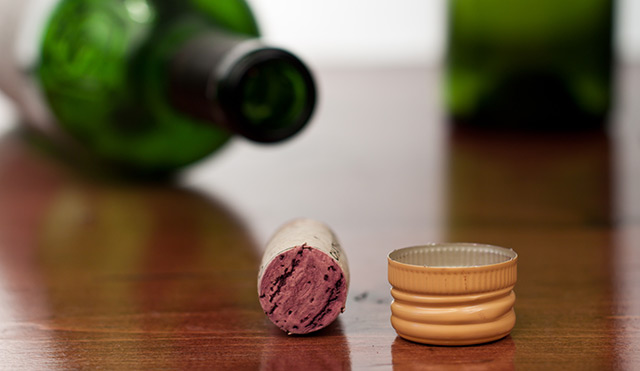 A little history; Stelvin caps were first introduced in the 1970’s when there was an outbreak of “cork taint” in Europe which brought the alternative wine-stopper into the public eye.

The Stelvin Screw caps met with customer resistance in New Zealand and Australia, and were phased out in the early 1980s, only to be reintroduced gradually in the 1990s. Now, since reintroduction, there has been an increase in the numbers of wineries utilizing the screw cap in those countries, but mostly because of the difficulty in obtaining quality corks and costs due to tariffs etc.

Allegedly, 3 to 5 percent of all bottles with corks have shown some degree of spoilage over 5 years. One of the culprits is trichloroanisole, commonly known as TCA. This complex chemical comes from reactions within corks, which involve natural molds and the chlorine bleach used in cork manufacture (or found in the winery itself from poor hygiene).

But the fact is that many wineries are extremely conscious of the cost of their corks, thus the poor quality cork choice comes into play. Wine corks can cost anywhere from 5 cents to 50+ cents for the best quality and a large percentage of wine corks used are not anywhere near highest quality. Preventing spoilage in wines stored over 5 years with poor quality corks can be a challenge.

The good news is there has been a significant increase in quality in the last 5-6 years, in that the cork manufacturers in Portugal have put forth strict requirements for quality in cork production. Also there has been a huge headway in the production of quality synthetic corks as of late. Cork producers have changed from bleaching the corks from hypochlorite to using peroxide bleaching, thus reducing a large percent of the cause of TCA.

Some wineries including Plumpjack Winery, Bonnie Doon Vineyards and others have embraced the Stelvin cap on their reserve Cabernet Sauvignon and white wines, but to date there is still resistance in Napa, Sonoma, the Central Valley and Willamette to their use in quality Cab and Pinot Noir bottles.

There is no gas exchange so the wine can’t spoil as easily as those with corks.

Less loss of inventory from wineries and retailers.

Largely associated with cheap wines, (bring one the next dinner party and see the reaction, right?)

Oxidation reduction can lead to reductive characteristics, including sulfur odors and tastes.

Things to Make From Wine Corks

7 Tips: How To Use A Wine Bottle Corker Like A Pro

Exactly How To Enjoy Wine In High Style This Holiday Season

How to Store Wines after opening without Cork

The importance of cork in the wine bottle and others, Interesting fact

Value of cork stopper, In wine journey, Read some facts and short details

From Cork to Canvas: Our Top Destinations...