Top Posts
Back IN ITALY the BtoB of European wine...
Antinori (Tuscany) – Italy
An important new selection of Italian wines on...
Il Maiolo Wines – Organic Winery in the...
WHISKIES OF THE WORLD
VINITALY AT THE TIME OF THE PANDEMIC
American Airlines Will Feature New Wines on Flights...
Ribble Valley wine shop with its own bar...
Wines from Spain announces 2022 tastings in two...
The Most Intelligent Wine Event In The World
Home WineSparkling wine Best Irish Whisky That You Must Try
Sparkling wine 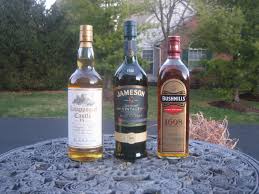 Irish Whisky that grow fastest over last three decades. Most are genuinely good, pleasant to sip, and fun to mix into your favorite Irish whiskey cocktails. Among these light flavored whiskies there are some of best well known Irish Whisky that you must need to try out. Here’s some best known whiskies for you;

Redbreast 15 Year is one of the richest, and heaviest Irish pot still whiskeys. The bottling is vatted from whiskeys aged between 15 and 19 years old and the cask selection is from 1st fill bourbon and sherry barrels. Redbreast 15 Year Old has won many awards including a Gold Medal at the International Spirits Challenge 2010. Get the full detail here.

Jameson Irish Whisky is one of ancient brand since 1780. This recognize is due to high quality and price point whiskey. is by far the best-selling Irish whiskey in the world; in 2018, annual sales topped 7.3 million cases.Jameson Irish Whiskey boasts a perfectly balanced flavor profile with spicy, nutty and sweet notes. The nose is lightly floral and peppered with spice, making this one of the most broadly appealing whiskeys on the market. Enjoy It.

Connemara is a fantastic whiskey and deserves recognition as one of the great whiskies of the world.It could be accurately described as smelling as if a toffee shop had burned down. Creosote, sugar, and hints of chocolate abound.Single malt Irish whiskey produced from peated barley and is a blend of 4, 6, and 8-year-old whiskies and it contains 40 percent alcohol/volume. Get more details Single Melt Irish Whisky.

MOST FAMOUS GRAPES Of PIEMONTE

THE SPARKLING WINE COCKTAILS EVERYONE SHOULD KNOW...